ZINKE or ZINCKE, also called Cornetto or Cornet à Bouquin (Fr.), is one of the oldest instruments known. It consists of a wooden tube, slightly conical, covered with leather, having six holes for the fingers, and one hole for the thumb on the lower side, while the tone is produced through a cup mouthpiece, similar to that of a trump. Its compass consists of a chromatic scale of a few notes more than two octaves. About the 14th and 15th centuries, when wind-bands gradually assumed a definite design, Zinken were most important instruments. Their powerful toned combined well with that of trombones, and bands consisting mainly of these two kinds of instruments were great favourites both at public fêtes and religious ceremonials. Many ancient writers on music mention it in terms of great praise. Artusi says: 'As to its tone, it resembles the brightness of a sunbeam piercing the darkness, when one hears it among the voices in cathedrals, churches, or chapels.' He further mentions two cornetto players at Venice as great artists on their instruments. Mattheson laments their partial disuse as early as 1739, and says: 'The fine Zinken and trombones, which formerly were considered to be of one family, and equally respected by players and composers, are now seemingly banished from our churches, as if they were useless; especially the Zinke, which, in spite of its harshness, is so penetrating,' etc.

Seb. Bach employed them for strengthening the upper voice parts in his chorales and choruses. Gluck was the last composer of importance who endeavoured to draw the instrument from its obscurity, employing it in several of his best operas. […] 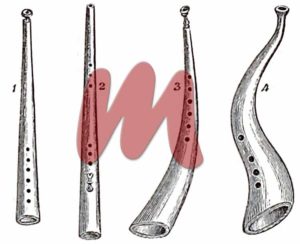 They were made of various lengths and shapes so as to form a complete choir among themselves. The common zinken were of three different shapes, although their pitch was the same, viz. (a) below. No. 1, Straight Zinke, Cornetto recto, Cornetto diritio, with a separate small mouthpiece. No. 2, Stille Zinke, Cornetto muto, soft Zinke, of a narrower tube than No. 1, the mouthpiece forming part of the instrument, and producing a soft tone. No. 3, Krumme Zinke, Cornetto curvo, having a louder tone, of a rather coarse quality, was mostly used by the guards on the watch-towers of towns, for giving alarm in case of fire, or to signal the approach of the enemy in time of war. Hence this kind of zinken also received the ironical designation of the 'Stadtkalb' or 'Towncalf.'

Besides these there was the 'Kleine Zinke' or Cornettino, four notes higher in pitch, with a compass as at (b); and the 'Grosse Zinke' (No. 4), variously called Corno, Cornon, Cornetto turto, etc., five notes lower than the common zinke, as at (c). The 'Serpent,' recently obsolete, belongs to the same family. The Italian name, Cornetti, and the fact of their being wood instruments, has led to curious mistakes, one writer describing them as 'small trumpets,' another as 'belonging to the oboe kind,' both being quite mistaken. The description given in Hawkins's History, Book VIII, chap lxxi, is absolutely incorrect. At p. 466, WINDBRAND, an ancient score is given, in which Zinken form the principal instruments. [J. A. Kappey in: Grove Dictionary 1890, 511]