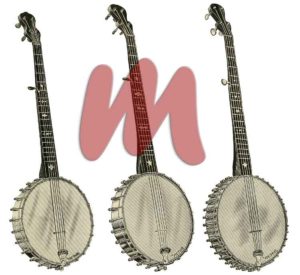 BANJO (American). An instrument of the guitar kind, played with the fingers, but without the aid of frets to guide the stopping in tune of the strings. The banjo has a long neck, and a body like a drumhead, of parchment, strained upon a hoop to the required writhe or degree of stiffness for resonance. There is no back to it. Banjoes have five, six, seven, or nine catgut strings, the lowest in pitch being often covered with wire. The chanterelle or melody-string is called from its position and use the thumbstring, and is placed not, as in other fingerboard instruments, highest in series, but on the bass side of the lowest-tuned string, the tuning-peg for it being inserted halfway up the neck instead of in the head. The length of the thumbstring is given as sixteen inches from the nut to the bridge, and that of the others twenty-four inches. The five-stringed banjo is tuned either the last note being the thumbstring, or in G, a note lower. […]

As to the origin of the banjo the existence of instruments of the lute or guitar kind implies a certain grade of knowledge and culture among the people who know how to stretch strings over soundboards, and to determine the required intervals by varying the vibrating lengths of the strings. Such instruments found in use by savage or very uncivilised peoples suggest their introduction through political or religious conquest by a superior race. The Arabs may thus, or by trade, have bestowed a guitar instrument upon the negroes of Western Africa, and the Senegambian 'bania' be, as Mr. Carl Engel suggests ('Musical Instruments,' 1874, p. 151) [siehe unten], the parent of the American negro's banjo. Others derive the name from Bandore. [A. J. H. in: Grove Dictionary 1879, 135]

[…] a harp with seven strings, called bána, is mentioned as an instrument of the Vei negroes by the missionary S. W. Koelle […]. The Vei negroes dwell north of Liberia in Guinea. The name bania, given in Senegambia to an instrument of the guitar kind, may, perhaps, be identical with the Vei bána, and also with the banjo, which appears to be the Senegambian bania imported by the negro slaves into America. [Engel Catalogue 1874, 151]