CITHER CITHERN, CITHORN, or CITTERN (Fr. Cistre, Sistre, or Courante; Ital. Cetera; Ger. Cither, Zither). An instrument shaped like a lute, but unlike a lute strung with wire strings, generally adjusted in pairs of unisons, and played with a plectrum of quill. The cither during the 16th and 17th centuries appears to have enjoyed great favour on the Continent and in England. The English citherns had usually four pairs of wire strings, but according to Mr. Engel ('Musical Instruments,' etc., 1874) it was not limited to this number. He quotes a curious title-page: 'New Citharen Lessons with perfect Tunings of the same from four course of strings to four-teene course, &c.' adorned with an engraving of a Bijuga (two-necked) cither, the counterpart of a theorbe or two-necked lute, strung with seven pairs of strings over the fingerboard, and seven single strings at the side. The date of this is 1609. John Playford published a book entitled 'Musick's Delight, containing new and pleasant lessons on the Cithern, London, 1666.' The Cetera or Italien cither was used by improvisatori, and extant specimens are often tastefully adorned with ornament. Finally, keyed cithers with hammers were patented by English and German makers.

The German Streichzither, as the name indicates, was played with a bow. This was horizontal, like the Schlagzither and its prototype the Scheidholt [Scheitholt], all of which variants will be more conveniently described under the accepted modern appellation of Zither, an instrument to place upon a table, well known in South Germany. 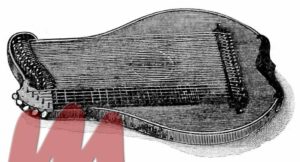 The difference between a cither and a lute is that the cither has wire strings and is played with a plectrum, while the lute has catgut strings to be touched with the fingers. The guitar also has catgut strings but has a flat back, not pear-shaped like the lute, and has incurvations at the sides, evidence of its derivation from a bow instrument. The name cither is derived from the Greek κιθάρα [Kithara], which, however, was another kind of stringed instrument. (See LYRE; also CHITARRONE, LUTE and ZITHER.) [A. J. Hipkins in: Grove Dictionary 1879, 359]