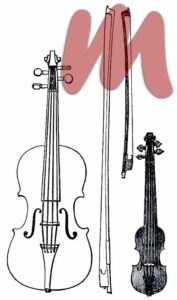 KIT, a tiny violin, which, before the general introduction of pianofortes, was carried by dancing masters in their pockets. Hence the French and German names for it were 'pochette' and 'Taschengeige' though pochette is also applied to an instrument of long and narrow form resembling a sourdine. It was usually about 16 inches long overall: the woodcut [s. Abb.] shows its size relatively to that of the violin. Sometimes, however, as in Nos. 61h and 66 of the Special Exhibition of Ancient Instruments, S. K. Mus. 1872, the neck was longer and broader, for convenience of fingering, which gave the Kit a disproportioned look. The instrument is now practically obsolete.

The origin of the name has not yet been discovered. In Florio (1598 and 1611), Beaumont and Fletcher, Ben Jonson, and Drayton, it seems evident that it is used without reference to size, as a synonym for Crowd, Rebeck, or Pandora. Cotgrave (1611) defines it as 'a small Gitterne.' Grew, in 1681, speaks of 'a dancing master's Kit,' and as dancing-master's Kits would naturally be smaller than other Kits, the name gradually adhered to them, as that of viol or violin did to the larger sizes. [Grove Dictionary 1880, 62]