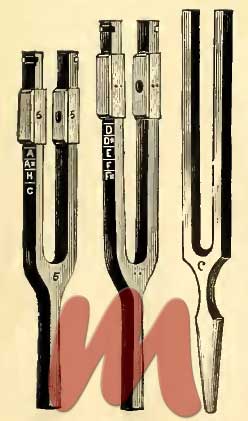 TUNING-FORK (Fr. Diapason, Ital. Corista, Germ. Stimmgabel). This familiar and valuable pitch-carrier was invented by John Shore, Handel's famous Trumpeter. From a musical instrument it has become a philosophical one, chiefly from its great permanence in retaining a pitch; since it is flattened by heat and sharpened by cold to an amount which is determinable for any particular observations. A fork is tuned by filing the ends of the prongs to sharpen, and between them at the base, to flatten; and after this it should stand for some weeks and be tested again, owing to the fact that filing disturbs the molecular structure. Rust affects a fork but very little: the effect being to slightly flatten it. Tuning-forks have been used to construct a keyboard instrument, but the paucity of harmonic upper partial tones causes a monotonous quality of tone. An account of the combination of tuning-forks into a Tonometer for the accurate measurement of pitch will be found under SCHEIBLER, the inventor. [A. J. Hipkins in: Grove Dictionary 1890, 190]